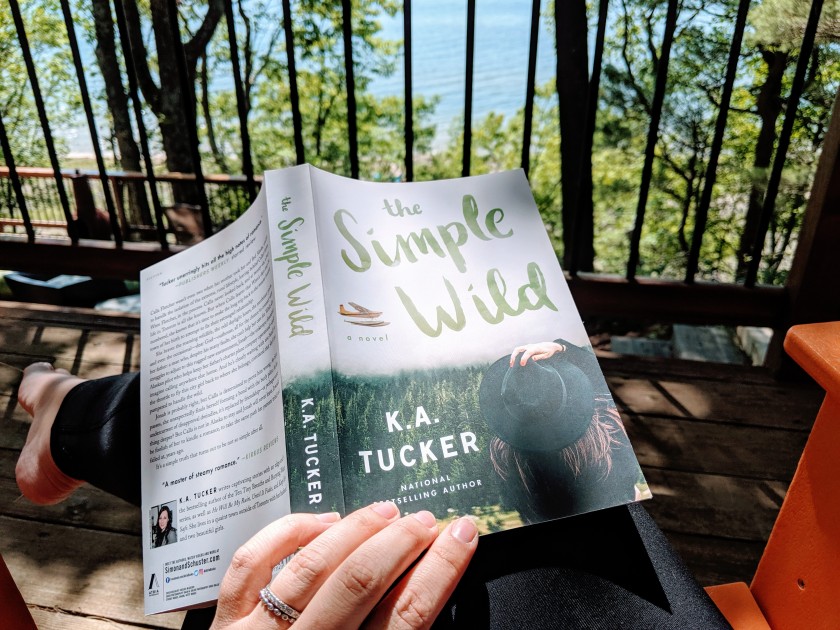 Our August selection, The Simple Wild by K.A. Tucker, seems a hit or miss for most readers. Either they love it, or Calla’s rampant millennial-ing  is too much to overcome. Personally, I was in the love it category! Don’t get me wrong, for the first 150 pages or so I severely disliked Calla. She starts off as an entitled, twenty-six year old city girl with little appreciation for any lifestyle outside of her own. She’s not an unkind person, just highly unlikeable. But after a point, and one specific scene at her father’s charter company, she starts to shed the self-absorbed persona and open up to the new world around her. After that, I was hooked!

The story begins when Calla hears of her estranged father’s cancer diagnosis (from her stepfather of all people, who I think is sneakily one of my favorite characters). After twenty-four years away she flies to the wilds of Alaska for a visit. She’s flown in by Jonah; a pilot with her father’s charter company, “Wild.” Jonah is a risk-taker, sarcastic, and brutally honest. In a lot of ways he’s the reader’s voice on the page calling out Calla on all her vapid behavior. Calla and Jonah are fast enemies, having no patience for each other. He calls her “Barbie” and she calls him “Yeti.” Think Tim Riggins meets Summer Roberts. But of course after a lot of sarcastic banter, and a few high-risk situations, the tides turn.

As I was reading I kept picturing Calla and Jonah’s story as something out of a CW series. Somewhere between Everwood and The Hart of Dixie maybe? A city girl finds herself wildly out of place due to unforeseen circumstances. But after a few comical fish-out-of-water incidents, and some lovable townie characters, she surprisingly finds herself feeling at home. And the rugged love interest doesn’t hurt.

“And just like that, I sense a circle closing. Back to the beginning, and near to the end.”

Although The Simple Wild falls solidly into the romance genre (not my usual read), it felt like more than just sexual tension and love scenes. The setting alone was a learning experience with so much interesting detail about what it’s like to live in an isolated Alaskan village. And there are strong themes of family, sacrifice, regret, redemption and telling your own story. The Simple Wild pulled at my heartstrings more then I’d been expecting. Calla’s relationship with her father, their healing and her evolution all had more gravity than I’ve experienced in this genre. And in my mind Calla’s character definitely evolved enough to have me rooting for her in the end.

The setting, characters, and love story all had me invested. I didn’t want it to end! If you’re at all interested in reading a good love story I encourage you to give this one a try. It will carry you to another world and a heartfelt story of love and family. Happy reading!