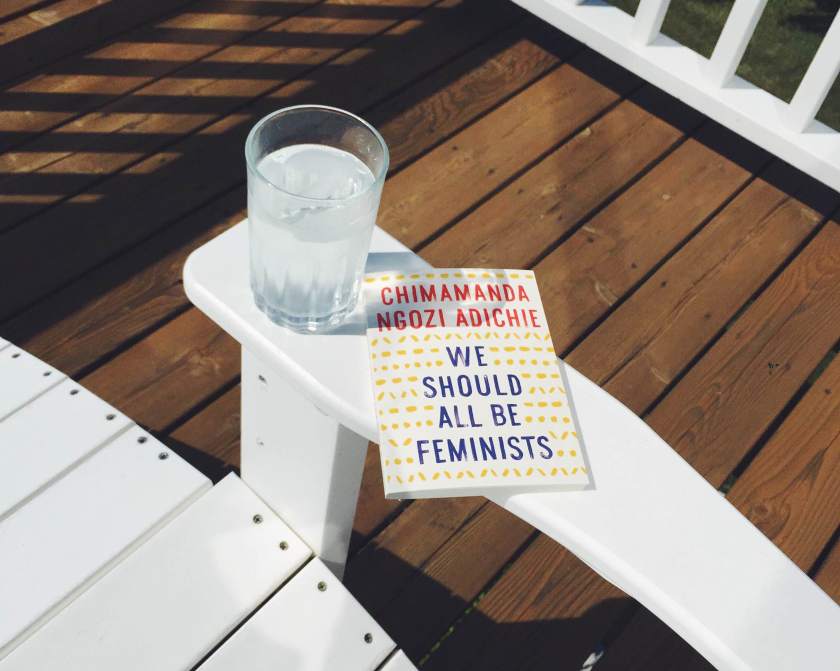 This was an interesting read. It made me think a lot about how I define feminism. Author, or speaker rather, Chimamanda Ngozi Adichie had a beautiful way of articulating complex issues and crystallizing her point for a diverse audience. I definitely enjoyed the read, but I think she only skimmed the surface. Which is unfortunately the current status of feminism in our county. In my opinion, the conversation she provokes in We Should All Be Feminists is the same one we’ve been having for 30 years. Yadda, yadda. Personally, I’m done with this broken record. Take it out of rotation. Let’s get on board with the issues already and elevate the conversation.

Don’t get me wrong, I liked all of Adichie’s points… It’s time the word feminism retained less of a negative connotation. In fact, it should have a positive connotation. And we should raise our daughters to a higher standard, instead of asking them to shrink themselves into smaller, more feminine, role. And all this change is within our control, “culture does not make people. People make people.”

But does this sound like anything new? Definitely from Adichie’s perspective as a Nigerian-American woman, it sounds like this is new information for her native culture. But as an American woman, it frustrates me that we’re still having this conversation nearly 100 years after women’s suffrage. And yet we still haven’t achieved equal pay, paid maternity leave, a better solution to childcare, respect for women’s health and her right to choose, justice in the legal system for violence against women…. it goes on and on. And it’s nothing new. For generations women have faced these issues head on, and I’d hate to think any of the inequalities my mother or grandmothers faced, will challenge my daughter.

Yes, progress had been made. But not enough, and not fast enough. I wonder why. What’s taking us so long?

That’s a whole other can of worms. But either way, let’s move on. Let’s agree women deserve equal pay, paid maternity leave, respect in the work force, legitimate childcare resources, respect for personal health decisions, justice in the legal system, etc. And make it so.

Once we get that far we can move into the next phase of the conversation… when given equal opportunities, how do we achieve success? This will be a conversation about a necessary paradigm shift. Current tools and measurements of success are in place for a male-dominated world… but women are different. We differ on every level… our needs, biology, chemistry, sexuality, mentality, etc… so I hope when my daughter talks about feminism she’s instead asking the question: now that we’ve achieved equality, how do we want to define success and how will we achieve it for future generations?