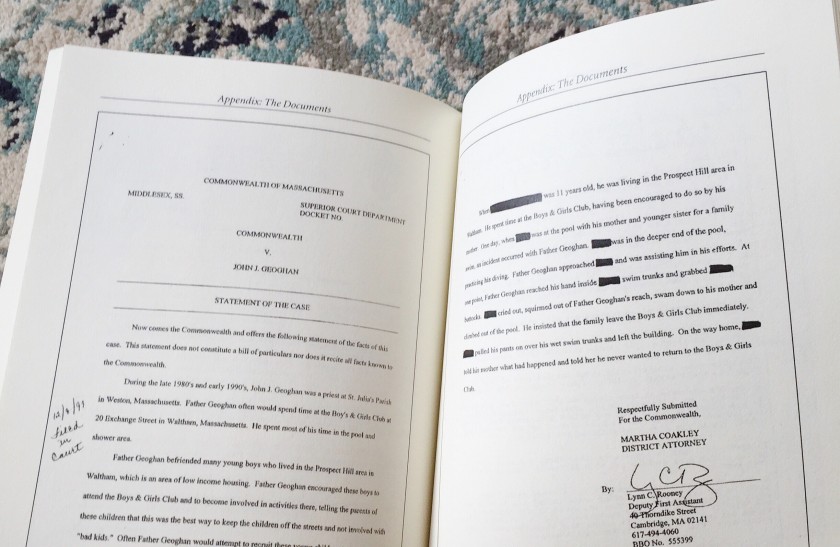 Betrayal was a difficult book to read. Frankly, at times it felt like reading just a laundry list of sexual abuse crimes. Gory detail after gory detail. One after the other, after the other. You get the idea. And as I was reading my husband kept asking me, “are you liking it?” and I wouldn’t know how to answer. I’m not sure if this is a book you can “like.” It’s not one you read casually. Instead, it’s one you read out of necessity. The stories this book tells are important ones that I think everyone should know more about. 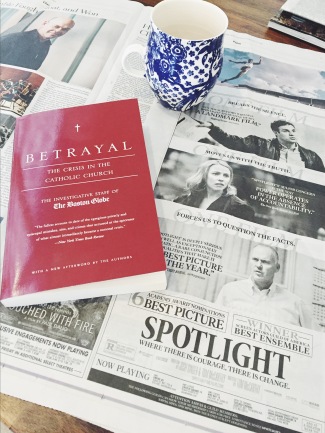 To catch you up to speed, Betrayal: The Crisis in the Catholic Church was written by the Spotlight team of journalists at The Boston Globe in the early 2000’s. It unveils the Boston-area Catholic Church’s deliberate negligence and cover-up of sexual abuse crimes committed by hundreds of its clergy members, allowing them to abuse thousands of victims for decades. The book is a compilation of the 600 different Spotlight investigative reports. It’s a battery of case files, statistics, victim testimonies, and allegations. As I was reading, I felt both badgered with detail and compelled to read on and learn more out of respect for these victims.

There were more than a few times when I had to put the book down and look away. I grew up in the Catholic Church (kind of). Until around 12 years old my family and I spent a lot of Sunday mornings at Church. But as years passed, and the Church’s innumerable flaws came to the surface, we stopped attending. And even though I now consider myself spiritual (and religious in some ways), I’ve stopped considering myself Catholic (not that my ties were very strong to begin with). And for me, this book has reaffirmed that decision.

The crimes committed by the abusers are only equalled (if not surpassed) by the Church’s complete and abject failure to protect its children from repeated, horrific, sexual abuse. As grotesque as its subject matter may be, this book is important to read.

“Among all the priests who dedicated themselves to healing souls and soothing hearts, some only pretended to do so. Their sexual misbehavior took a staggering toll on the victims, on the victims’ loved ones, and on the Church: souls darkened, hearts broken, lives shattered, families disillusioned, faith abandoned, and the Church exposed to potentially catastrophic claims.”

It’s important to know what happened. We need to make sure this never happens again. And it’s important to understand more about the why’s and hows. For example, the chapter I found the most interesting was ‘Sex and the Church’ which addresses the questions surrounding these crimes, more specifically, why did (does) this happen? This is a complete psychiatric phenomenon that presents itself at an intensity ONLY in the Catholic Church. Most people are quick to blame celibacy and/or homosexuality. However, no evidential proof has been found to connect the two with the incidence of sexual abuse. Or maybe it’s because there’s a mentality of “boys will be boys,” and unlike with young girls there’s not the same supervision or suspicion involved when a priest takes interest in a young man. Well, I don’t believe that no supervision equals a criminal act. But yes, it makes it easier to perpetuate.

“There is a danger of cynicism becoming so bad that too many people will presume that all priests are like that, and that’s no fair either. My feeling about priests is like my feeling about cops. Most are good. But if there are bad ones, I’ll go after them. And the few bad ones are making everybody else look bad.”

So why does this happen? Well, there’s no real answer. Yet. Very few reports / studies / thought leaders are asking this question from a medical and/or sociological perspective. Or they haven’t received the recognition and action they deserve. But I hope they will. The answer won’t be a simple one, but I believe the Church’s unique environment of fraternity, loyalty, discretion, secrecy and guilt creates a safe haven for these criminals. And unfortunately that has hurt more men and women than we’ll ever know.

The Spotlight team at The Boston Globe fought hard to bring these crimes to justice and give a grain of peace to the victims. It’s the journey that those journalists took to tell these stories that’s depicted in the movie Spotlight. As anyone will tell you, the move was great! Obviously the Academy agrees considering it won Best Picture at this year’s Oscars. I definitely urge you to see the movie! And I read the book before I saw the movie, but I think it might be a better choice to see the movie before reading the book. The movie tells such a powerful story of the efforts made by many to bring these stories to light, that  knowing more about the work it took to tell these stories might give you that much more appreciation for stories themselves.

But I want to end this with a story from Betrayal. Just in case you don’t read this book, I think you should know about Tom Blanchette:

Tom Blanchette is a victim of Father Birmingham’s sexual abuse. The abuse started when he was eleven years old (the 1960s). He was repeatedly attacked (he estimates 300 times). He says he held onto immeasurable anger for years afterward. Unlike most victims, he confronted his tormentor.

In 1988, Blanchette visited Father Birmingham at his Church (yes, he was still an active priest even after several past accusations) and got the chance to say these words to him, “What you did to us -and to me specifically- was wrong, and you had no right to do that. Having said that, it brings me to the real reason I’ve come here. The real reason I’ve come here is to ask you to forgive me for the hatred and resentment that I have felt toward you for the last twenty-five years.” When Birmingham asks why, Blanchette responded, “Because the Bible tells me to love my enemies and to pray for those who persecute me.” Birmingham then dissolved into tears, collapsing on the floor.

Blanchette did not see his abuser again until the following year, the day he died, at Symmes Hospital. Birmingham was then an 80 pound skeleton dying slowly of cancer, sitting by his hospital room window. And that’s where his story ends. Blanchette prayed with him, helped him into his hospital bed, and Birmingham died the next morning. 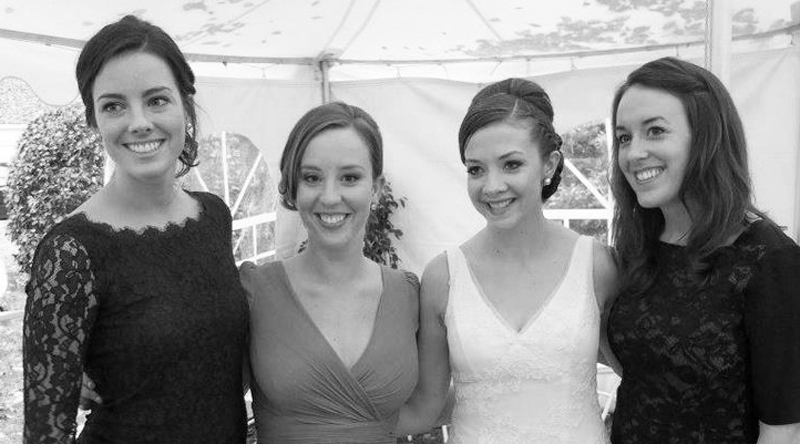