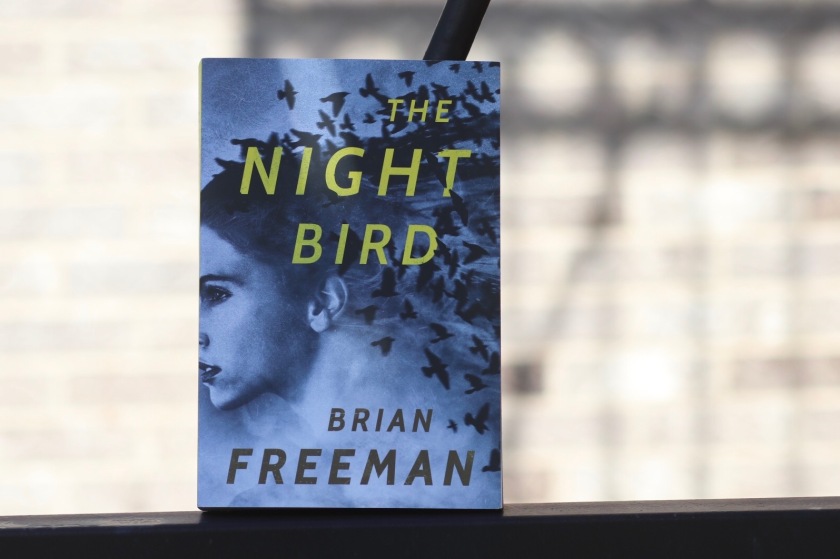 Happy Fall, everyone! As I write this the Midwest is sweating under 90 degree heat, even though leaves are starting to fall. Let’s hope while you’re reading this it’s more fall-like out there, and hopefully a more perfect setting for our spooky October book: The Night Bird by Brian Freeman.

A Chicago native, Brian Freeman worked in Marketing and Public Relations before becoming an author. He made his debut with the crime thriller Immoral in 2005. Since then he’s written over a dozen thrillers following the stories of different investigators; Jonathan Stride, Cab Bolton, and Frost Easton. And the first (so far only) of the Frost Easton series is The Night Bird. As Freeman describes it:

“Frost Easton is a Homicide Inspector in the dramatic locale of San Francisco. He’s young, with a sexy shock of swept-back brown hair, a neat beard, and laser-like blue eyes.  He’s unattached, except for his cat, Shack, who patrols the city with him. Think Justin Timberlake with a gun, and you’ve got Frost.”

It seems like a bit of a stretch. Too good to be true? We’re willing to find out.

In this, the first of the Easton series, he hunts a serial killer who preys on his victims’ suppressed memories and phobias. And as detective Easton follows his leads, psychiatrist Francesca Stein does her own digging, convinced that whomever is behind these elaborate murders is ultimately out to destroy her and what she’s worked for. A page-turning thriller with plenty of twists and turns is just what we’re in the mood for this fall!