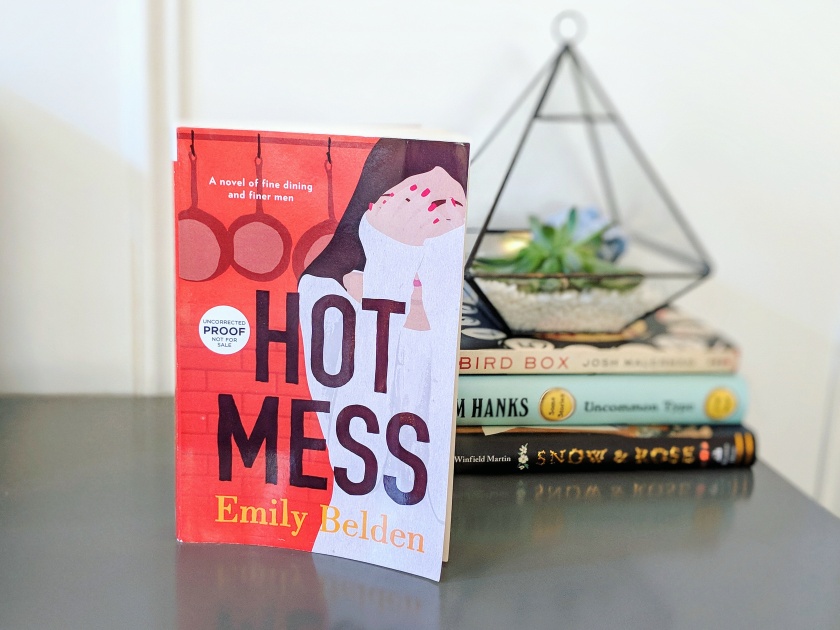 As Bookly’s first ARC, courtesy of Graydon House (thank you!!), “Hot Mess” by EmilyBelden was our perfect match. It’s the story of Allie Simon, a young woman living in Chicago amidst her quarter-life-crisis of sorts. As you may (or may not) know, Bookly is made up of four Katherines from different cities who run this book club together. And I happen to live in Chicago (it’s me, Katherine C.)! Even more fitting, one of my daughters shares a name with the author (her middle name, Belden, named after a street we lived on for years).

So it felt meant to be, and right away I volunteered to read “Hot Mess.” Although, to be honest, I had my doubts. I like to think I have fairly diverse taste in books, but anything under the Harlequin umbrella is not really in my wheelhouse. So I had no idea what to expect. And it was a bit of a rocky start.

Allie Simon’s story starts when she’s only months into a relationship with Benji Zane, the latest and greatest star on the Chicago foodie scene. He’s covered in tattoos, sports a man bun (not my thing), flies through life with unblinking confidence, and is well known for having a raging cocaine problem. So despite Allie’s infatuation, all signs point clearly to disaster. And that’s where I struggled in the beginning. Benji is a controlling, co-dependent, unlikable, narcissist who tweetes a sext of Allie’s as his official girlfriend announcement. So when nearly two-thirds into the book Allie is still pining for this wreck of a love interest, I was worried this might actually be the story of Allie’s näiveté. Could she actually end up with this guy? Was this one of those love stories where the woman successfully “fixes” the man, setting more unrealistic expectations for women in relationships (ahem, Fifty Shades of Grey)? If that was the case I was ready to drop the book right then and there.

But Belden has written a story that’s more complicated (and feminist) than I ever suspected. Without giving too much away, I will say that “Hot Mess” far exceeded my expectations. Even through the frustrations of Allie and Benji’s relationship I was hooked. I had to know what happened to Allie (I didn’t care for a minute where Benji ended up). Belden’s writing kept me interested in the fate of Allie’s relationship, and most importantly her career. That’s what you may not realize, at its heart this is the story of a young woman figuring out her career path, and coming out of her mistakes stronger. And kind of a badass, actually.

I loved how Belden wrote Allie’s story so that at first I was yelling at her, “why are you being so stupid?!” But by the end she’s a kick-ass a character you feel, weirdly, proud of. And there’s no lack of strong women in this book, which I loved! Allie’s counterparts Angela and Tabitha are great characters. Angela specifically is one who I’d love to see played out on screen. Her mixture of vulnerability, strength, know-how, and sarcasm was very entertaining. Not to mention how fun it was to read about all the Chicago details! I also love Molly’s Cupcakes, and this book had me craving their red velvet cupcake with vanilla cream cheese frosting (yummm).

So if you’re ever in the market for a story with a complicated, smart, successful female lead who experiments in love and delicious food, this is it. I’m excited for this one to come out (March, 2018!), I think it’s a great spring/beach read and I can’t wait to see what else Emily Belden has in store! And thank you again to Graydon House for sending this one our way!