It’s been dark and gray for awhile now. I’d say we’re ready for more light, literally and figuratively. Which is why in April we read something with a sense of humor to help lighten the mood. And this April we’re reading Trevor Noah’s Born a Crime! And we’re SO excited for this one.

If you know the name Trevor Noah, it’s either because you’re a fellow booklover and have heard GREAT things about this book, and/or you’ve seen Noah on The Daily Show as Jon Stewart’s replacement as of September, 2015. He’s a comedian (writer, producer, political commentator, television host, etc.), so we definitely expect a few laughs out of this book. However, from the little we know so far, he also has a very interesting, pretty intense, story to tell. 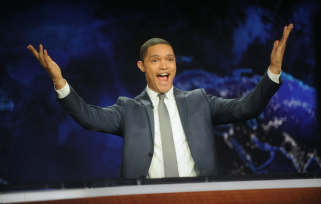 Noah was born in Johannesburg, South Africa during apartheid. The son of a black mother and a white father, his parents’ relationship was illegal. His childhood was layered with all the complexities of race, religion, family, homeland, and everything in between. Beginning his career at age eighteen Noah started performing in a South African soap opera, then moved on to hosting various programs, then stand-up comedy, and eventually Senior International Correspondent at The Daily Show in 2014. And in the Spring of 2015 it was announced he’d replace Jon Stewart at the show’s host after his legendary 16 year run. Quite the shoes to fill.

When he first started on the show a lot of people (us included) didn’t know who he was before The Daily Show. But between this book, his stand-up, and his success on The Daily Show, we’re starting to realize how much there is to learn about the new host. And we can’t wait to read all about him! Also, we’ve heard from a lot of people (our Kathryn D included) that the audiobook is awesome. So we hope you’ll read (or listen) along with us this month, and if you do make sure to share on social media using #booklymark.