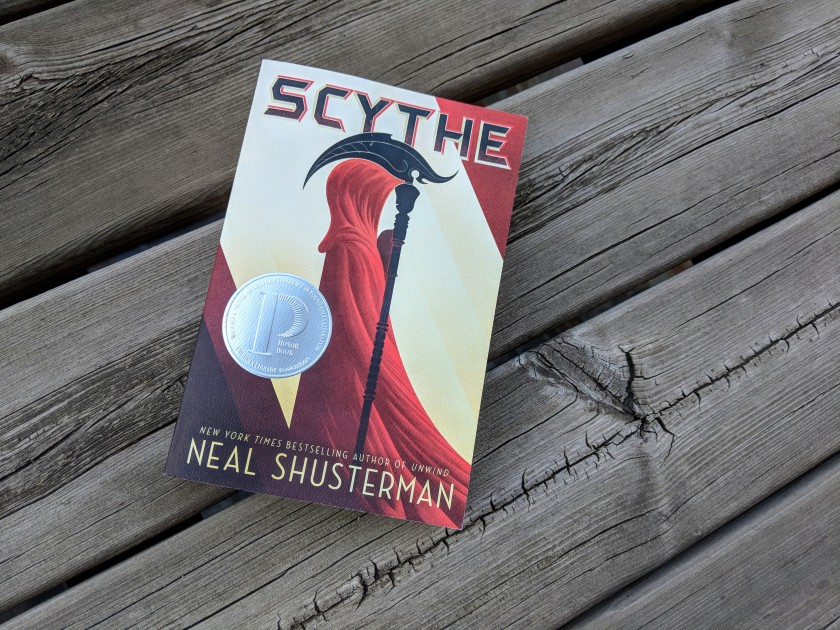 After reading a series of intense fiction and nonfiction books, I was really looking forward to something I could escape into. I’m a fan of the dystopian series I’ve read in the past (The Hunger Games, Divergent, An Ember in the Ashes, etc), and I’m always looking forward to finding another great series. I had moderately high hopes that Scythe might be my next favorite series. I was moderately disappointed.

The premise, in my mind, was stellar. A future dystopia masked so well as a utopia that even as the reader I was convinced for most of the 430+ pages that this world could be what it seemed (if it weren’t for the fact that it’s a YA series so of course I know better); a world without natural death, disease or crime. It’s a world where climate change has been reversed and people can “turn a corner” at anytime to reverse their aging and return to youth. In this world all things are supervised by an evolution of the “cloud” known as Thunderhead whose moral leanings have yet to be determined. Yet the supervision stops dead with the “Scythedom;” a group of ordained men and women who kill. The world’s only worry, with all the perfection within it, is over population. Without death, families can live among their grandparents, great grandparents, and have numerous children (grandchildren, great grandchildren, etc, etc). So the Scythe’s live and work outside of the boundaries of society, beyond the rules of Thunderhead, and take the lives of those they choose. All for the greater good, of course.

Some take lives mercifully, some wrongfully relish in the killing. Here’s where a lot of the book’s conflict comes from. The moral conflict of those who devote their lives to this order and how they resolve what they do with their humanity. But I couldn’t really get there. What do I mean? Well, as stellar as I felt the premise was, and as excited as I was to see where it went, I felt like the author failed to fully bring me into the world.

In any dystopian novel you enter into the story with a few obvious questions as the reader. How did the world get here? Why do the people in it accept this as reality? What are the major conflicts and why haven’t they been able to resolve them yet? Answering these questions lets you invest so much more in the world, the story, and the characters that have been created. But Scythe left me with a lot of unanswered questions…

I don’t feel like these questions are so complicated that the author couldn’t have written them away with some calculated explanation. But he didn’t, or at least not that I noticed. So by the end  of the book I wasn’t really in the world. I wasn’t fully invested in the characters. But I still enjoyed reading the story. It was a fast read, and (again) the premise was interesting. I think it’s definitely worth a read if you’re curious about it. The concept alone clearly brings up a lot of questions about humanity. But for me, it just didn’t hook me.

Ok, that’s enough for now. See you back here in July 🙂