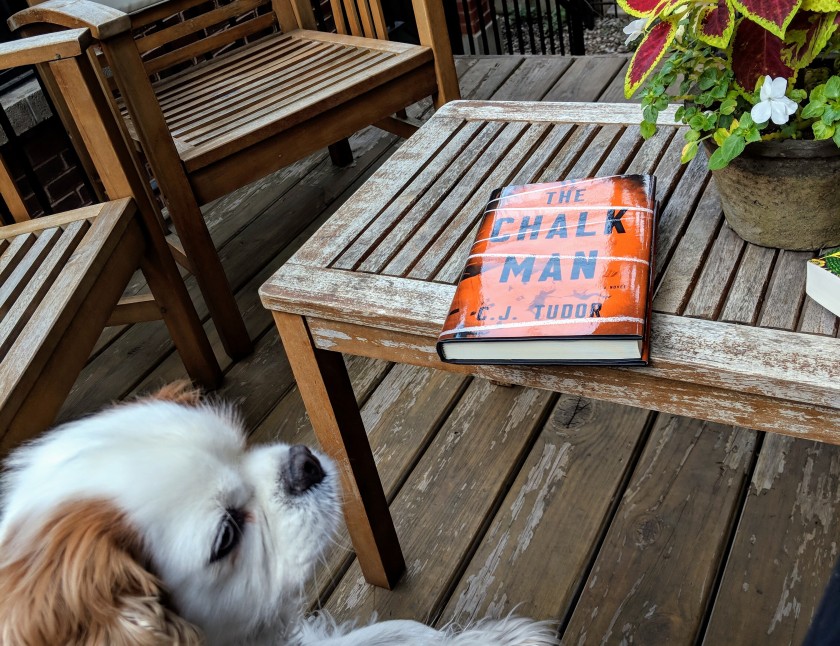 The weather is changing and there’s a new chill in the air, so now’s the time for a chilling story. Maybe more than any other month, October begs you to read something fit to the season; something a little spooky to give you the creeps and put you on the edge of your seat. So if, like us, you’re in the mood for a good ghost story read with us!

This month we’ve chosen The Chalkman by C.J. Tudor thanks to our Instagram community. Normally we come up with suggestions among the four of us and vote. But this year we opened the suggestion box to our Insta community and The Chalk Man was a nomination by one of our followers. And we’re so glad she suggested it!

It’s British author C.J. Tudor’s debut novel that Stephen King commented on as, “Want to read something good?…If you like my stuff, you’ll like this.” Tudor lives in Nottingham, England and before writing she’s had a long history of various other professions (dog walker, voice actor to name a few). But with the success of this first novel it seems she’s found her calling as a full-time author. And her second book is in the works, set to be released in February of next year (The Hiding Place)!

Here’s what you need to know about The Chalk Man…

In 1986, Eddie and his friends are just kids on the verge of adolescence. They spend their days biking around their sleepy English village and looking for any taste of excitement they can get. The chalk men are their secret code: little chalk stick figures they leave for one another as messages only they can understand. But then a mysterious chalk man leads them right to a dismembered body, and nothing is ever the same.
In 2016, Eddie is fully grown, and thinks he’s put his past behind him. But then he gets a letter in the mail, containing a single chalk stick figure. When it turns out that his friends got the same message, they think it could be a prank . . . until one of them turns up dead.
That’s when Eddie realizes that saving himself means finally figuring out what really happened all those years ago.
Expertly alternating between flashbacks and the present day, The Chalk Man is the very best kind of suspense novel, one where every character is wonderfully fleshed out and compelling, where every mystery has a satisfying payoff, and where the twists will shock even the savviest reader.

We hope to hear from you, happy reading!