May and June mean school’s out and it’s almost summer! This time of year we like to read a good YA book to celebrate this liberation. Our pick this May / June was selected as the Goodreads Choice Awards winner for the Best Young Adult Fiction in 2016.

Salt to the Sea by Ruta Sepetys is set in the winter of 1945 when four teenagers flee four different homelands for safe passage on the Wilhelm Gustloff, a ship that promises refuge and freedom. And each of the four teenagers—Joana, Florian, Emilia, and Alfred—harbor their own secrets which haunt them at every step of their journey. The paths of these four converge along the way when tragedy strikes.

This book was inspired by the greatest tragedy in maritime history. It’s estimated that as many as 9,400 people died. Sepetys’ book sheds light on this great tragedy through the story of these four young men and women, each fighting for survival and freedom. 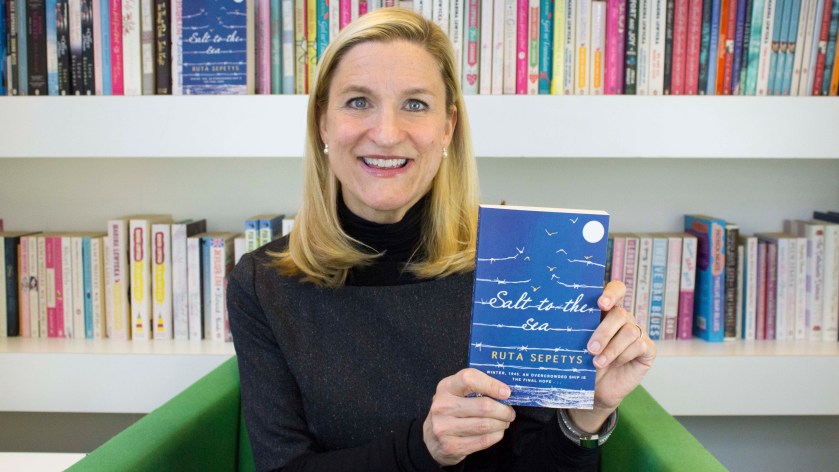 Sepetys said she wanted to shed light on this event… “Every nation has hidden history, countless stories preserved only by those who experienced them. Stories of war are often read and discussed worldwide by readers whose nations stood on opposite sides during battle. History divided us, but through reading we can be united in story, study, and remembrance. Books join us together as a global reading community, but more important, a global human community striving to learn from the past.” And it appears she’s succeeded with Salt to the Sea as the praise seems unending:

“Compelling for both adult and teenage readers. Once again, Ruta Sepetys
acts as champion of the interstitial people so often ignored —
whole populations lost in the cracks of history.”
– The New York Times Book Review

“Sepetys is a master of historical fiction…she once again anchors a panoramic view of epic tragedy in perspectives that feel deeply textured and immediate.”
– Entertainment Weekly

“Ruta Sepetys’s riveting novel is a haunting reminder of an almost-forgotten disaster and the resilience of the human spirit.”
– The Washington Post

“The forgotten tragedy that was six times deadlier than the Titanic.”
– TIME